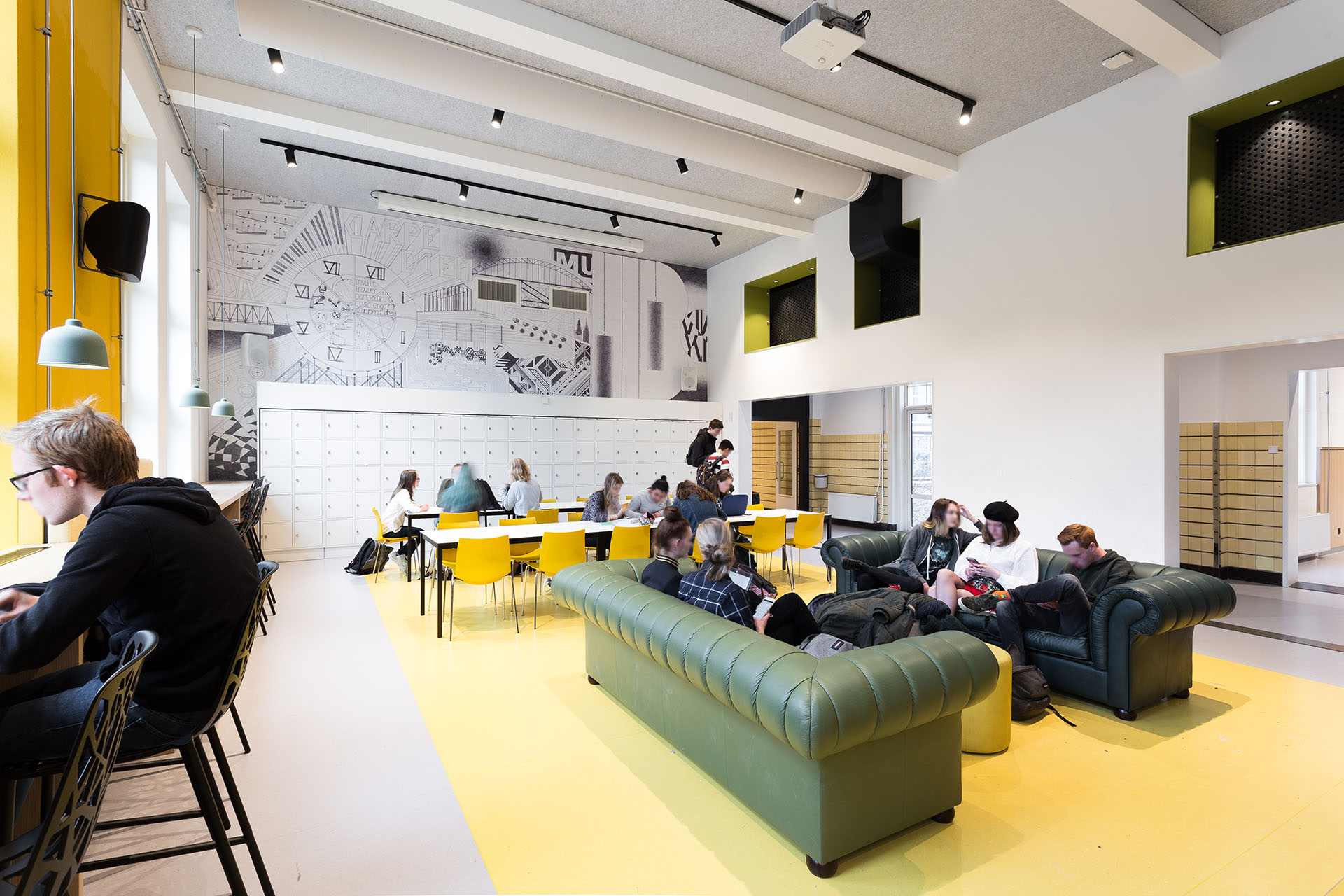 ZENBER Architecten accomplished the redevelopment and optimization of the Stedelijk Gymnasium in Nijmegen. The existing historical elements were left intact as much as possible, combined with new interior architecture in the style of today. The goal of ZENBER’s design is to support, stimulate and facilitate the teaching methods. It has become a transparent, attractive and safe school building with a multifunctional break space/ study area, where students feel at home. 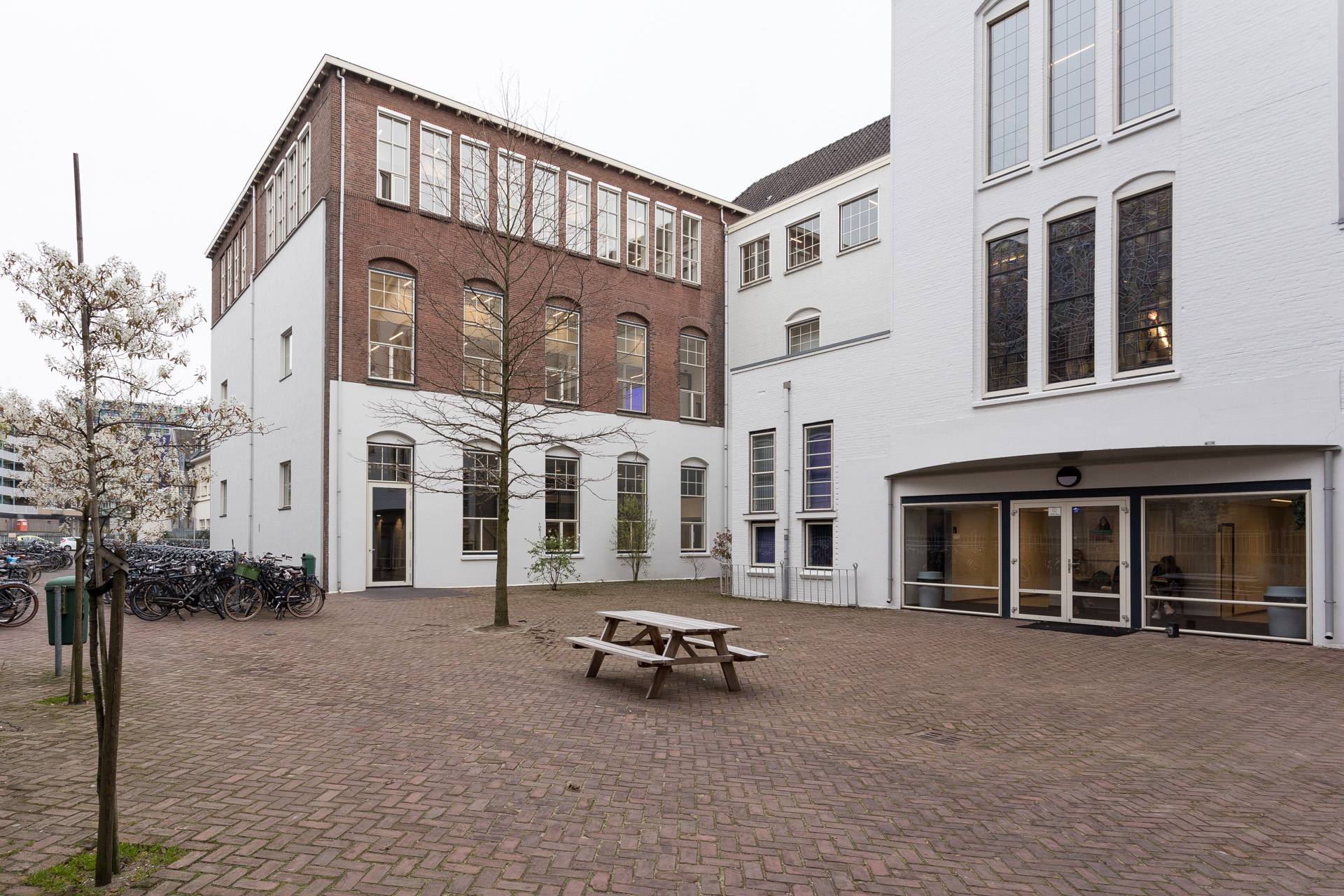 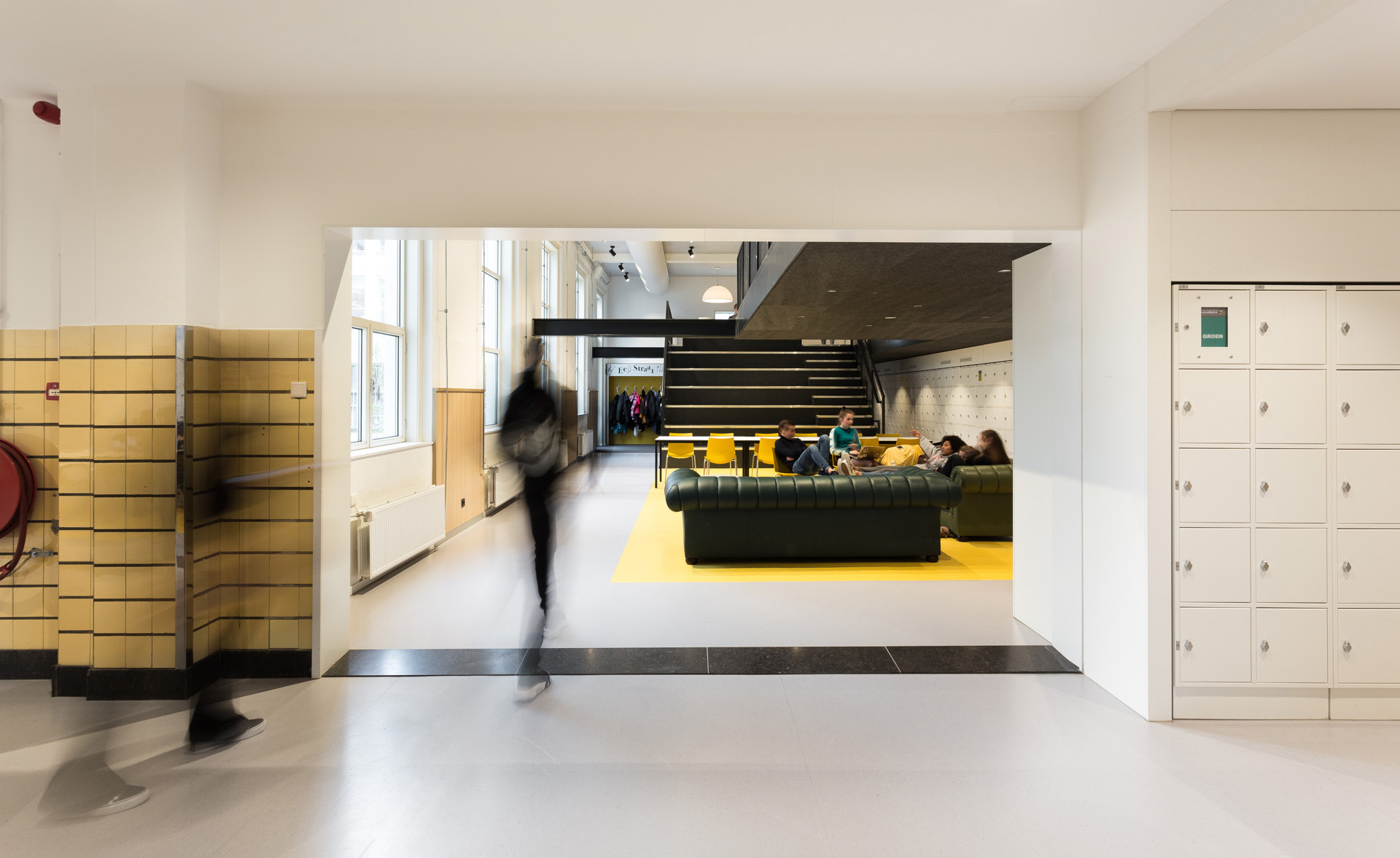 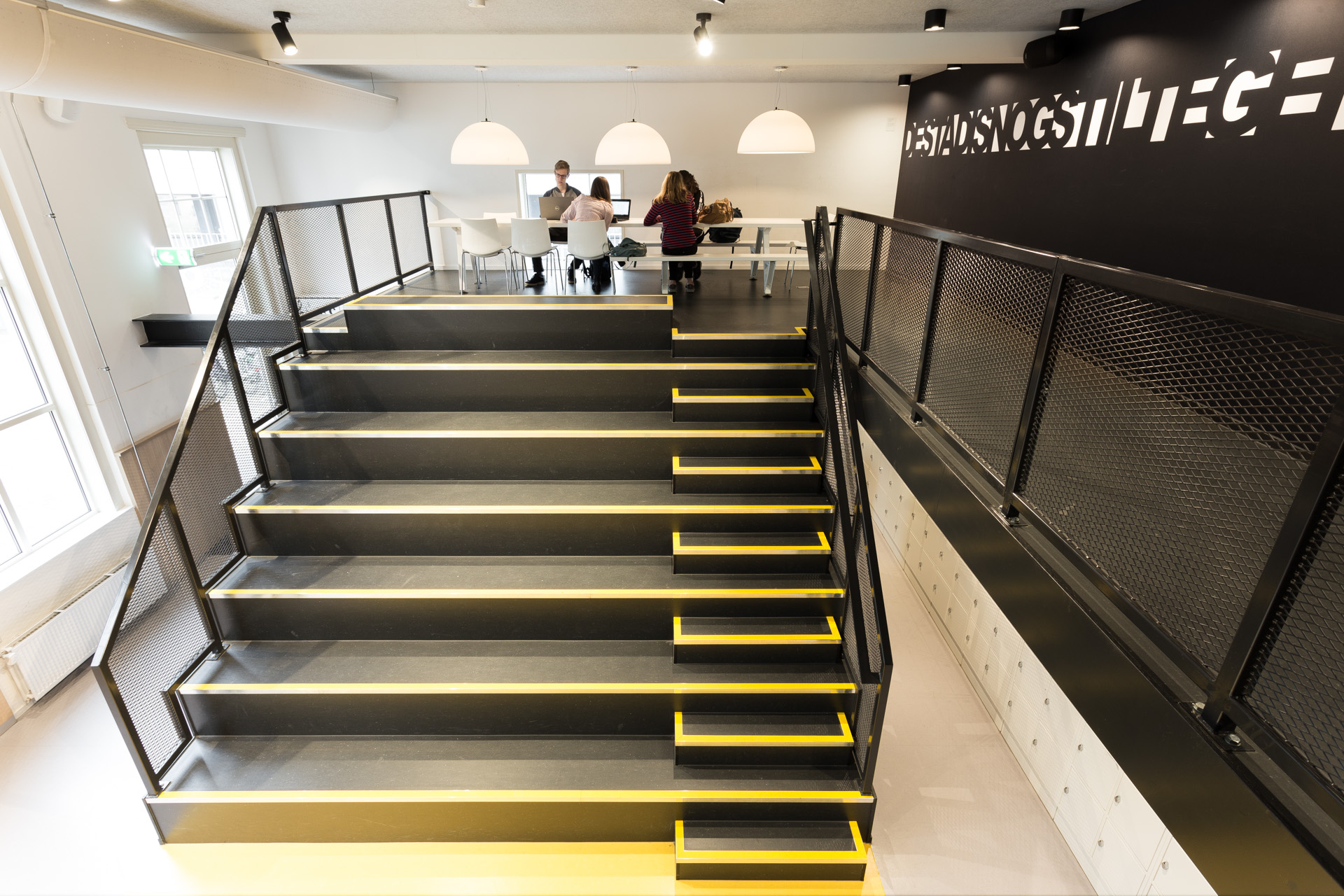 The Stedelijk Gymnasium Nijmegen understands reason: personal growth and intellectual development of the students is leading, and own initiatives of the students are always welcome. The modern education method consists of the three pillars: Knowledge, Development and Friendship. The school climate breaths openness, friendliness and respect for each other. Pupils are open and respectful towards each other, and have a smart, open minded vision upon the world around us. 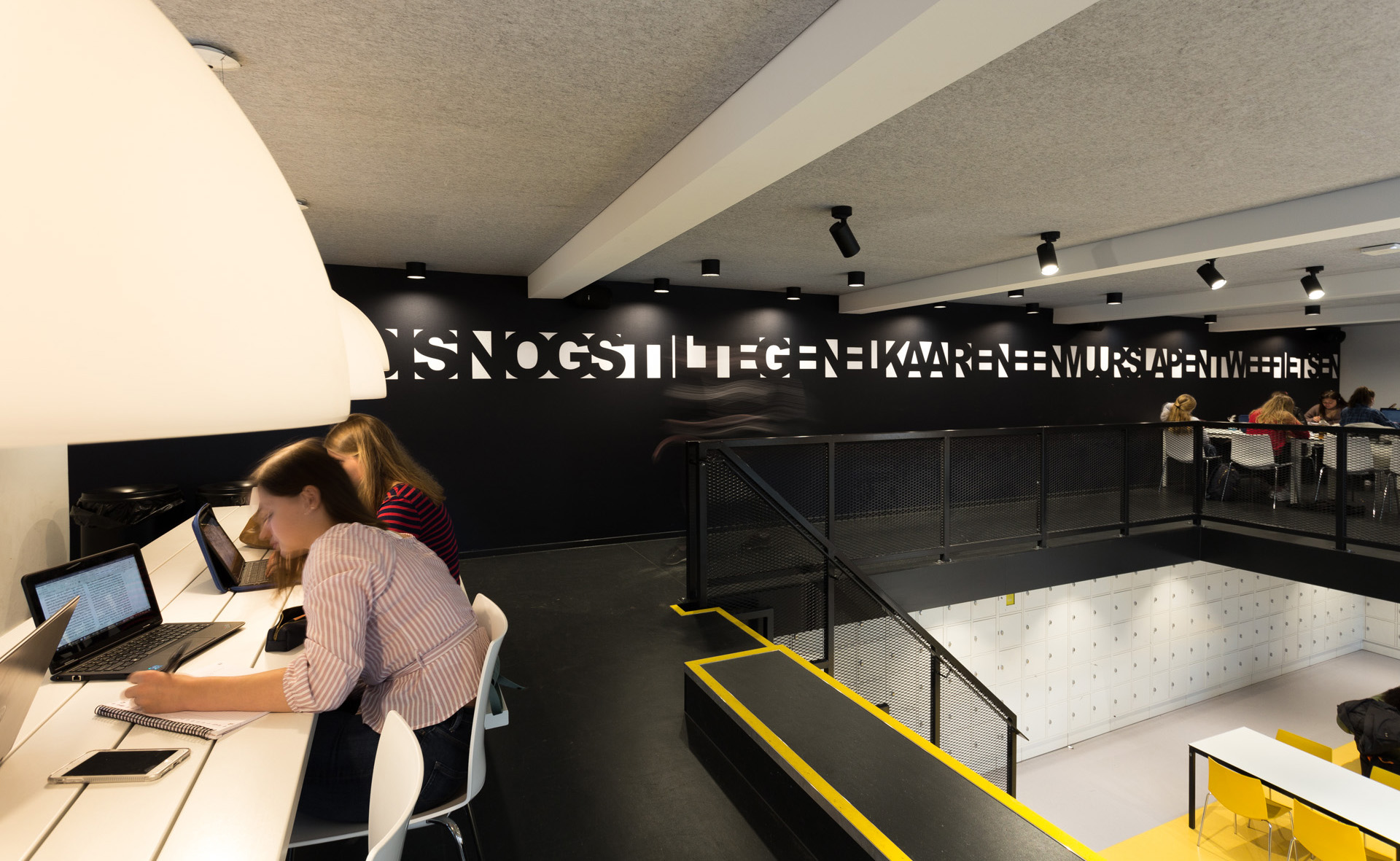 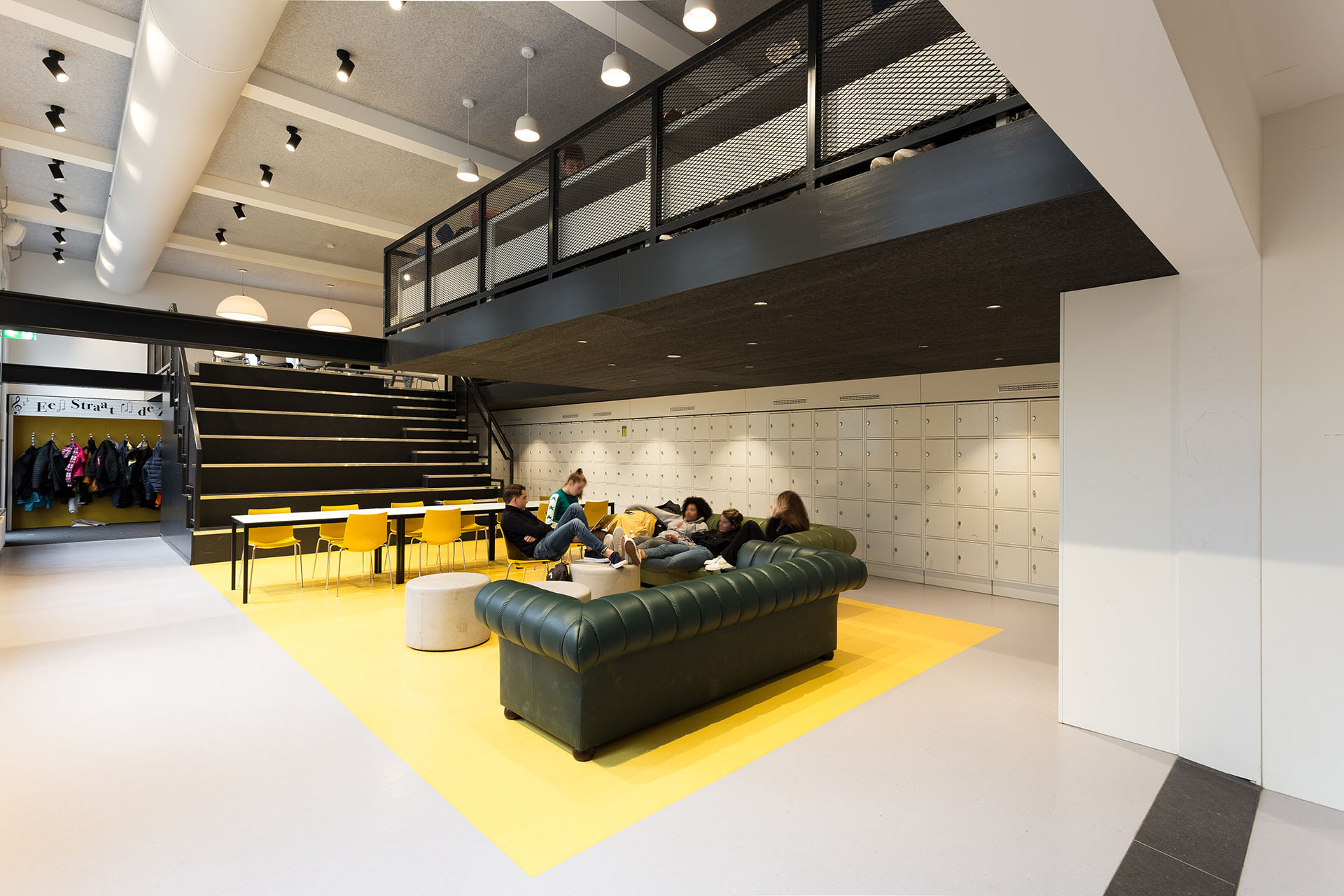 In special workshops students and teachers shared their vision about design solutions, color palette and art and graphic elements. Based on these workshops, ZENBER developed a master plan for the entire building, in which optimization of the existing space and the overall look & feel, preservation of the historical elements, sustainability of the building and improvement of the indoor climate were paramount. Architectural adjustments such as a new entrance and adapted facade improve the flow and spaciousness of the building.

ZENBER designed a building with a free flow of daylight, and with cozy areas scattered over a larger space, where students and teachers feel comfortable and at home. 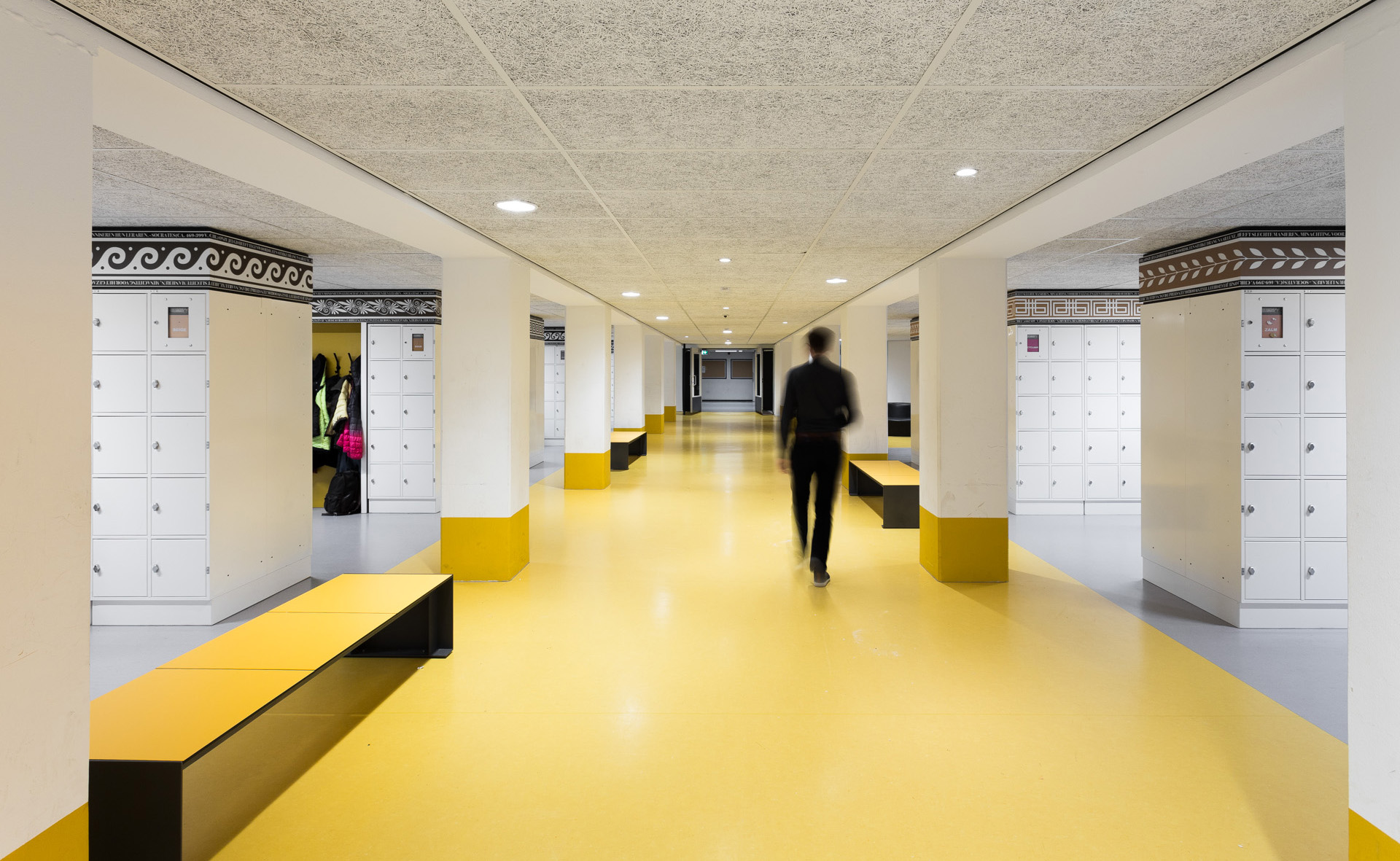 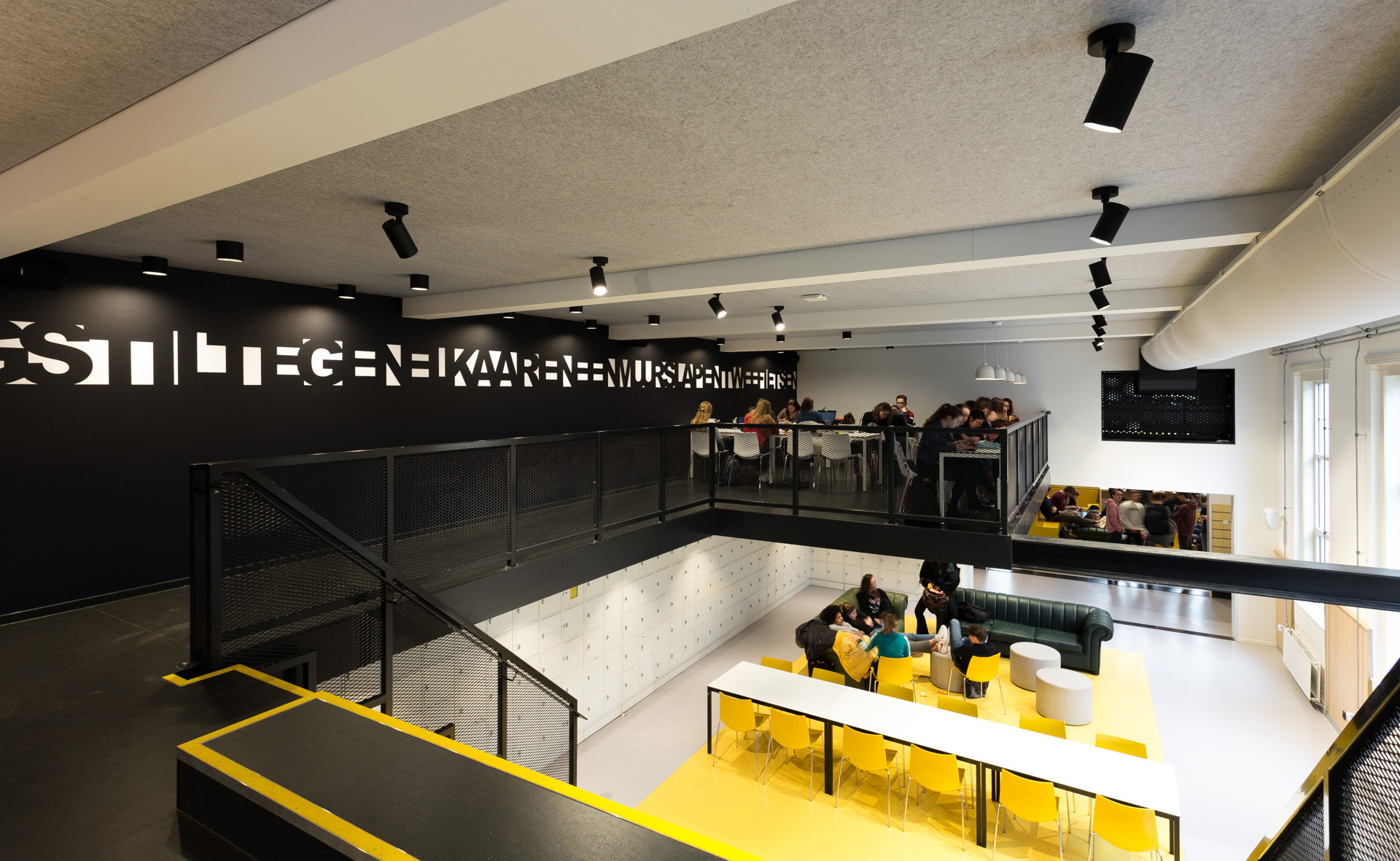 The school building consists of three wings of which the oldest part dates from 1886. ZENBER has left the old character intact as much as possible. Existing details and ornaments served as a starting point for the functional additions. The source of inspiration for the fresh yellow color of the break space were the characteristic yellow pastel tiles on the walls. Yellow is also characteristic of SGN’s house style and has been implemented in the rest of the building, among other things to indicate zones within the transparent open spaces.

Classrooms on the first floor were renovated and redesigned in efficient spaces, giving room to the ground floor where space became available for a dynamic break, lunch and study space. Another extension of surface was found by creating am mezzanine, where students can work in concentration an in silence.

The break space has several functions: a concentration room (with enough sockets for charging the laptops), a chill room with its own pantry and water tap (the students indicated that they preferred water over a soda machine), a multifunctional presentation room with a stand and the popular sofas where the students like to meet to chill, and a lunch room. The zoning is indicated by art and graphic elements, designed by the students themselves. 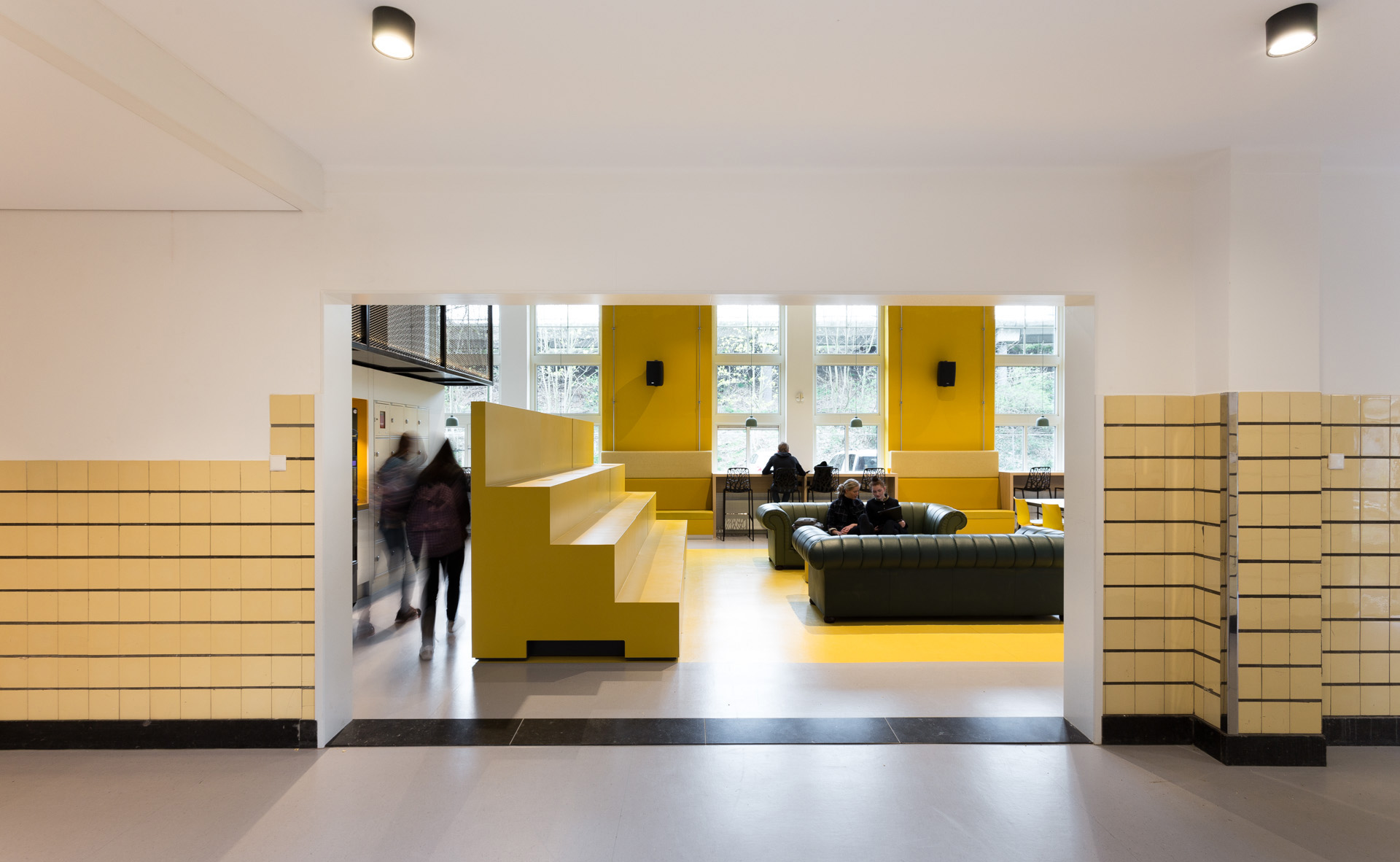 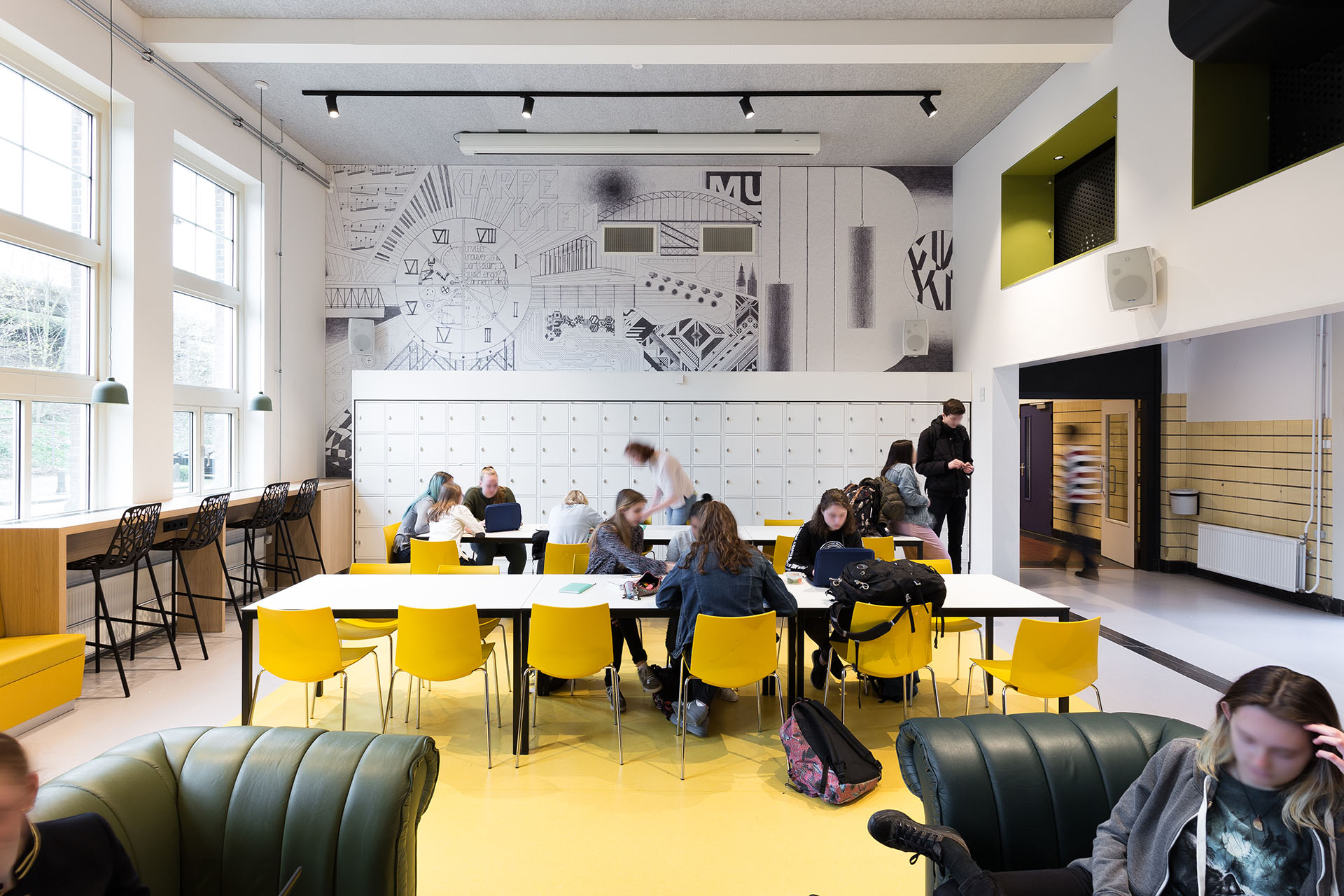 Classrooms on the first floor were renovated and redesigned. A classroom can be divided in two separate spaces by a panel wall, so that each created space can be used separately. By moving a share of lockers to the new break space, the locker room in the basement has become more spacious, and more comfortable by adding color and seating elements.

A main requirement was to improve the indoor climate in a sustainable way and to create a sustainability plan for the building. In collaboration with Van Kessel & Janssen Bouwconsultancy, Bongers/Jansen and Ed Peters Advies, the ventilation capacity and the energy performance were greatly improved. All lighting in the building has been replaced by LED lighting. The efficient layout of the building is an energy saver, and the classroom furniture has been reused. 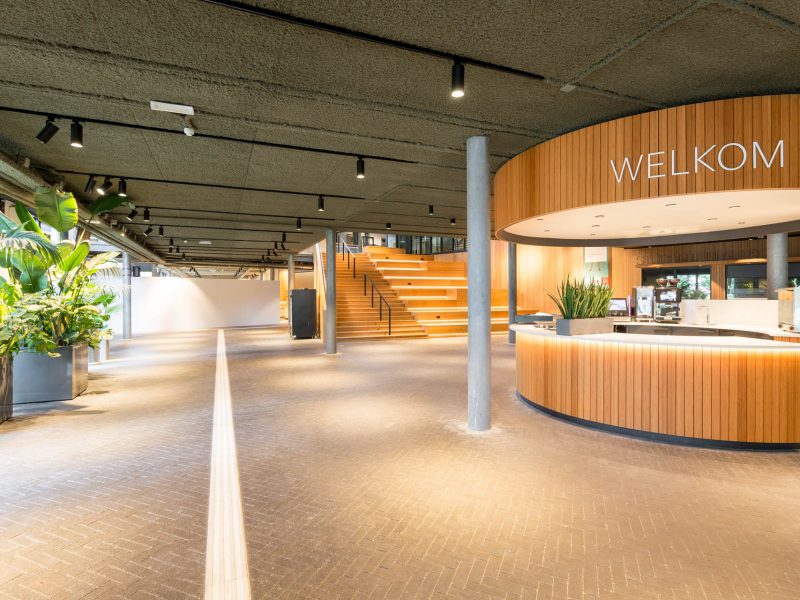 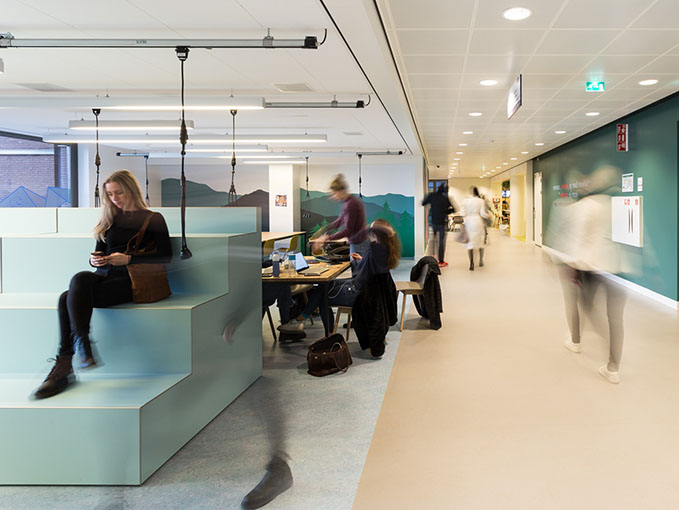 Meeting and working together
view 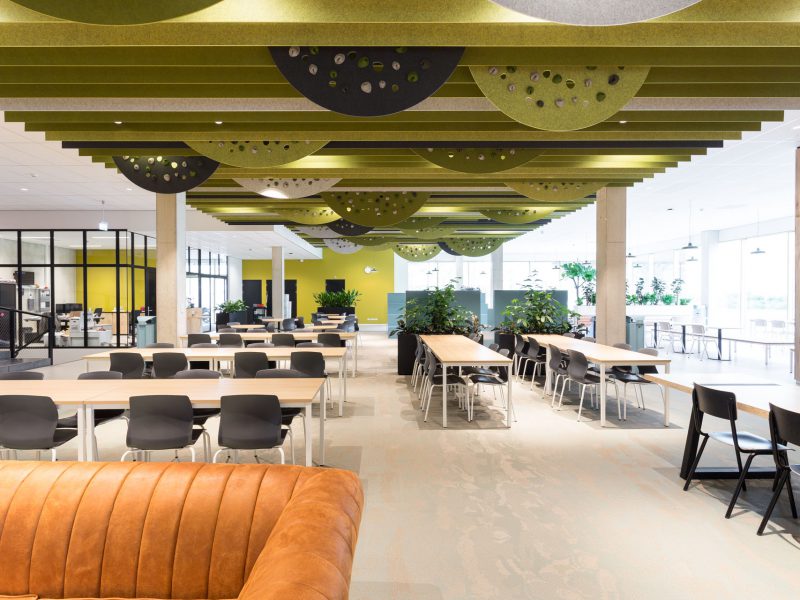 INNOVATIVE LEARNING ENVIRONMENT IN A COLORFUL AND GREEN OASIS
view 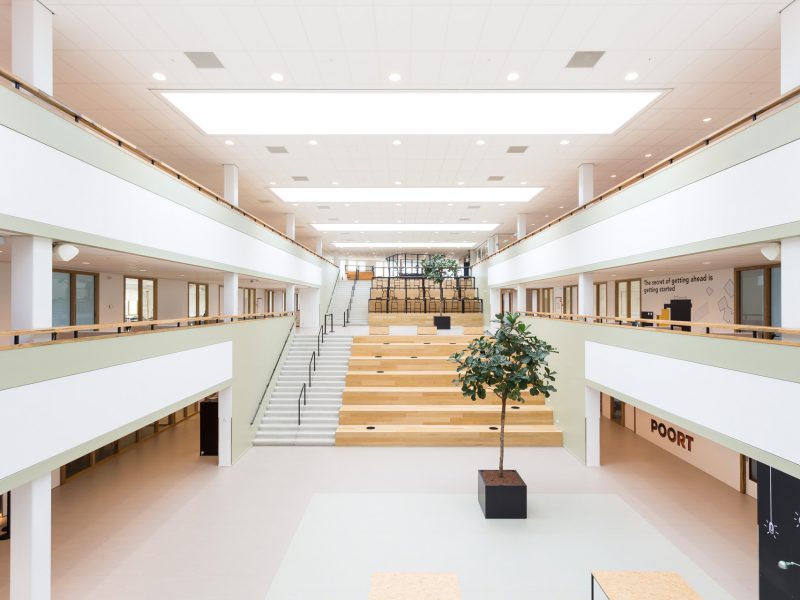